I’d first heard about the band GrimWolf by pure coincidence a few years ago. I’d picked up a heavy metal podcast for a little while, as a result of a favorite band of mine being featured on it, and happened to find a GrimWolf song on the very next episode of said podcast. At the time, I’d taken a lengthy hiatus from the werewolf scene in all its various forms and fashions (roughly 4-5 years) and the song, which I believe was “Full Moon Draw,” got my attention again, and I picked back up on my werewolf fanaticism roughly where I’d left off. (And I started following the band’s activity closely.)

Nonetheless, as the band has a new EP coming out soon, I got in touch with lead vocalist/guitarist Brent Wisdom to ask him a few questions about how the band got started, about their upcoming release, and about cool werewolves in general.

Lycanthropology 101: How did the band GrimWolf come about in the first place? Had anyone in the band played in bands together before?

Brent Wisdom: GrimWolf is the brainchild of Brent our lead guitar/vox, started in October of 2008 really out of frustration of the direction of the other band Joe [Downard] and Brent were in K626. I wanted to do something different, something that was all mine, you know. I didn’t really even have any intentions to do anything live with the music. Then the tension in K626 got to a boiling point right after the release of our last album “The Gates of Necropolis” and I just up and quit the band. GrimWolf was already doing shows here and there so we just kept going.

There have been a handful of other werewolf-themed metal (and punk) bands out there. Did you draw any inspiration from them, or was the werewolf theme decided on your own?

Wisdom: At first I (Brent) had no clue about any sort of werewolf genre and my first inclination was to do something more melodic than K626 was doing and do clean vocals over it. After I was infected with lycanthropy the band name came to me GrimWolf, based upon a D&D monster I made up…then one thing lead to another and I was like, I can sing/growl vocals about my exploits as a werewolf, or stories of past werewolves. It will be fucking tits!

How would you describe your sound to someone who had never heard of GrimWolf before?

Wisdom: We have inspirations rooted in thrash metal with a death-metal-esq vocal and shit can get melodic. Above all we are werewolves so it’s brutal. 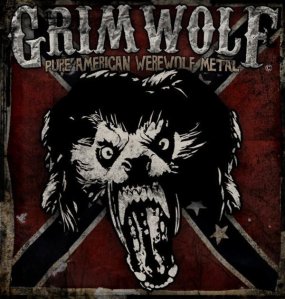 The new disk, Order of the Lycan, will be your second EP since Pure American Werewolf Metal back in 2009. Looking back, how satisfied are you with that debut release?

Wisdom: The debut release had a lot of buzz when it came out. That was back when MySpace was still a thing but in decline. We had a lot of hits and people interested in what we were doing. Lycanthrope was a full length. We rerecorded the songs off of PAWM and added seven more to show people that we meant business as a band and people have taken some notice and we like the hard core fans that have taken to us and recognized who we are and what we are doing. We are werewolves after all and wolves have a tendency to be in a pack and roam together…but not all who wonder are wolves. ;) Or werewolves.

You’ve mentioned on a Full Moon Update that Order will be the first GrimWolf release that was recorded without a click track. How did that affect the recording process?

Wisdom: For about the last 10 years of recording Joe and I have used a click track to be precise and on time but we felt we lost the flow and groove of some songs. To a point they did not sound the same to us in a live situation. It was really sketchy going into the studio saying…well, this is either going to suck ass or it is going to be the best decision we’ve made. At this point I think it is the best decision we’ve made. Things flow right and it’s us…..exposed. This is who we are love it or leave it.

How would you say your sound has evolved from PAWM to Lycanthrope to the new Order release?

Wisdom: We are definitely not the same band we were back then. PAWM was written entirely by me, even programming the drums. Joe gave his take on Lycanthrope and now we are even more established with this EP. I think people are going to see an new side of GrimWolf and our dicks are pink about it.

What is your songwriting process like? Has it changed since the band first started?

Wisdom: I think it is basically the same since I’ve started writing. The song structure and riffs I write at my lair. Then I’ll send my guitar tracks to the guys and they’ll start to listen. We get together and start fleshing out the drums which then often changes the groove of the song. Carlos and I will offer structure ideas from a live perspective then we’ll do a live recording. Then I’ll send that recording to everyone so we can star critiquing it, changing things or scrapping the song entirely. It’s quite a process. We are still making changes even days before we record for some parts of songs.

You recently took an interest poll in releasing Order on cassette tape. Do you have any updates on what format(s) the EP might be available on, or is that a secret?

Wisdom: We could tell you but then you might be our next meal. And consequently the subject of another song. I think even now it is still up in the air. The physical CD will be released on our Site on the October 25th the day after our CD release show on the 24th. Then the digital release will happen on October 31st. If we get a good response, ( sell copies ) we may release in tape and possibly vinyl. Only time will tell.

If you could pick a single track from Order that you’d call your favorite, what would it be?

Wisdom: Oh shit. That is a hard question. I really like how “Skinwalker” came out but “Death Anthem” is killer too fuck so is “Ripped In Two.” No, I can’t pick, ha ha ha.

What are your thoughts on touring? And can we expect a GrimWolf tour at any point?

Wisdom: We’d love to do it. But we are all old wolves with pups of our own. It’s hard in this industry and economy. If we can pay our bills we’d be on it. We are hoping to at least do either a west coast or southern mini tour. We’ll see if that pans out.

What could a new fan expect from a GrimWolf show?

Wisdom: Brutality, force with emotional strife and maybe some comedy. Every now and again possibly their demise. We do get hungry after our shows and a lycan’s gotta eat. So they better say they are a true fan because we tend not to eat the real true fans.

Who’s the best werewolf in film of all time?

Wisdom: David Naughton from American Werewolf In London. Period. The other guys may disagree but that’s my pick.

Wisdom: Make sure you stop by our web site and see what we are doing, sign up for our newsletter, like our Facebook page, youtube page and all that shit. You can find all those links at www.GrimWolf.net :D

Order of the Lycan is due out on physical versions on October 25, 2014 while the digital version will be released on October 31, 2014. GrimWolf’s debut full-length album Lycanthrope can be purchased through iTunes and CD Baby, while their debut EP Pure American Werewolf Metal can be downloaded for free from the band’s ReverbNation page. GrimWolf can be found elsewhere on the web here: